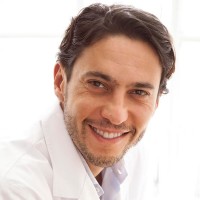 The aim of this presentation is to focus on Clincheck space managment 3D control and clinical tracking with clear aligner therapy.

Space achievers such as: proclination, posterior expansion, IPR and upper or lower distalisation should be carefully selected and combined during clincheck planning in order to achieve the best esthetic,functional and periodontal final results. The challenge is to avoid on one hand teeth extractions and on the other hand undesired excessive incisor proclination and posterior expansion which can lead sometimes to unexpected gingival recessions as side effect. 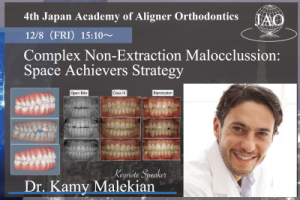 The first time I heard Kamy’s name was at the 2010 European Aligner Summit in Barcelona. At that time, doctors in Japan were being taught to wrap up treatments in 35-stages. But Kamy  spoke about a non-extraction molar distalization treatment with 60, 70 aligners with precise tooth control. I was blow away. I had no idea anyone was doing this kind of treatment.
Last year in the spring we were both speakers at the French Association of Aligner Orthodontics. After our presentations, Kamy we had our first real conversation. At the end of our talk, I asked him if he would come present at the 2017 JAAO. He said that he couldn’t wait and insisted I let him present at the JAAO in 2016, which he did.
His personal policy is to try and avoid any invasive procedure as best he can like extractions and miniscrews. His policies are in line with the most appealing fact of Invisalign treatment: relatively painless, discrete, non-invasive treatment. His principled approach always impresses me.
This year, he won the 2017 Peer Review Reward, this is truly his year. It is a golden opportunity to see him speak here at the JAAO.

[2017 JAAO Presentation] This year, like last year, he will be presenting on cases utilizing molar movement to avoid extraction in di fficult cases. Attendees will be amazed by what he has achieved in non-extraction cases with Invisalign. Last year, he presented a Class III case, this year he will speak about Class II, Class III and Anterior Open bite cases and methods for treating  challenging cases like these.

* Lectured more than 300 Invisalign Certification & Study Clubs throughout Europe, as well as spoken at all European Summit editions from 2005 to 2020.